Colleges and universities across the United States are using power purchase agreements (PPAs) to facilitate solar deployment. According to a report from the National Renewable Energy Laboratory, PPAs led to the deployment of over 100 MW of solar up to 2016. In this blog post, we’re going to explore PPAs for universities and colleges, but before diving right in, you may wish to read the National Renewable Energy Laboratory’s list of key PPA terms at this link.

A power purchase agreement allows an offtaker to purchase power from a developer at an agreed-upon rate, for a specified period, without taking ownership of the system. The developer is responsible for procuring and constructing the solar project, as well as the operation & maintenance of the system, which may be located either onsite or offsite. Whether the system is on the premises or located remotely, a PPA allows the offtaker to see the benefits of solar without owning the system. With regards to the topic at hand, the university would be in the role of offtaker, working with a solar developer to accrue the benefits of solar PV without claiming ownership of the system itself.

How Does a Power Purchase Agreement Work?

As noted above, the university/offtaker would purchase power at a negotiated rate ($/kWh) for a certain period of time, without taking ownership of the solar PV system. Either the project developer or, in some cases, tax equity investor, would own the system. Again, the developer remains responsible for procurement, construction, operations, maintenance, etc.

What is the PPA Process?

This report from the National Renewable Energy Laboratory (NREL) breaks down the PPA Process into three key steps—Preliminary Assessment, Finding a Project Developer, and PPA Negotiation. Below, we will explore these three steps using information from the NREL report.

The first step in the process is to determine the viability of solar PV for the university in question. Generally, universities wish to determine both the economic feasibility of a solar project, as well as whether or not solar PV aligns with other university goals and values. Prospective project developers can carry out preliminary site assessments at locations which may be used for the solar array.

Generally speaking, offtakers will use a request for proposal (RFP) in order to solicit PPA bids. RFPs allow universities to identify which elements will be negotiable and nonnegotiable during the PPA development process. A competitive bidding process will also allow the university to identify the ideal developer based on factors like experience, financial stability, performance guarantees, and more.

Once the university has identified a suitable project developer following the RFP bidding process, it’s time to negotiate the PPA. Items to negotiate as part of the long-term power purchase agreement include:

PPAs usually range somewhere from 15 to 25 years, which makes sense given the expected lifetime of solar panels, and may factor in options for the offtaker following the conclusion of the PPA term. These options can include:

The chart below, courtesy of the NREL report on university PPAs, identifies the key differences between a fixed PPA price, and a PPA escalator. 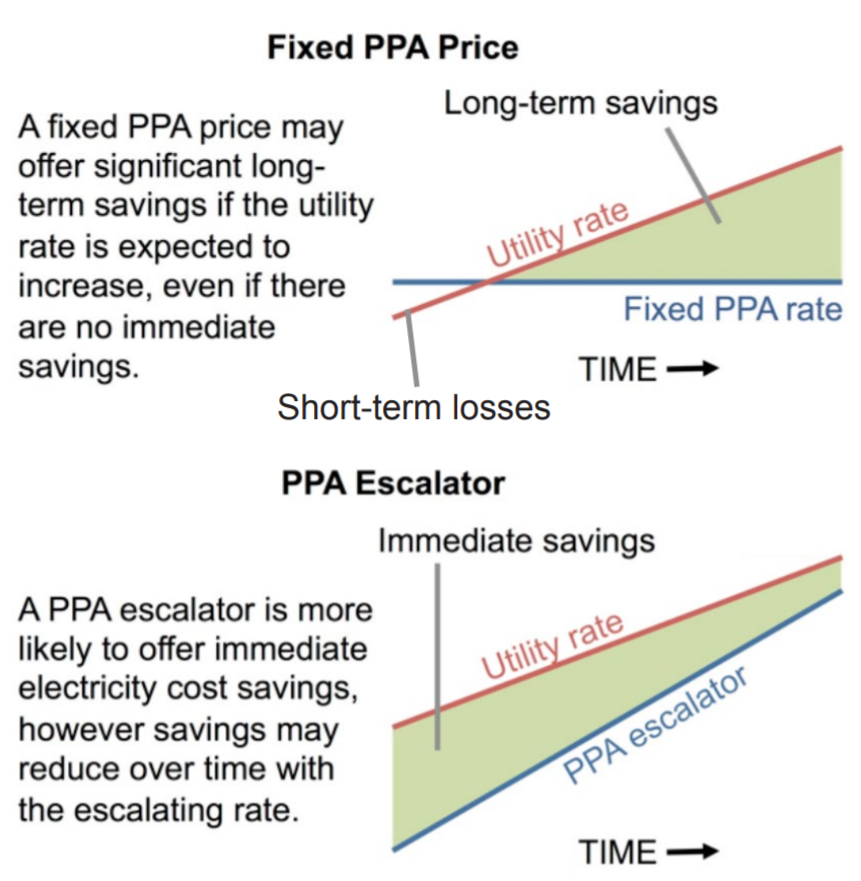 As noted above, another aspect of the negotiation process concerns ownership of environmental incentives and attributes. This refers to renewable energy certificates (RECs), which can be used to meet clean energy requirements and goals. In some cases, the university/offtaker may wish to claim ownership of these RECs in order to meet climate related targets, but it could improve the economics of the project if the developer takes ownership of the RECs. The NREL offers more detailed information on RECs at this link.

Benefits of a PPA

There are a number of reasons why universities across the United States are using power purchases agreements to deploy solar PV.

Challenges of a PPA

Of course, despite all these benefits, there are some challenges and obstacles which can be associated with a solar PPA for universities.

Although state regulations may limit or restrict the sale of electricity by non-utility providers in regulated markets, certain states have facilitated PPAs through clarifications regarding third-party system owners. To learn about the PPA policy in your state, consult The Database for State Incentives for Renewables and Efficiency.

If you represent a school, university, or other educational facility, then you could benefit from a solar PPA. YSG has been operating in the solar market for over ten years and will guide you through the entire process of going solar, from start to finish. Send us an email or call at 212.389.9215 to learn more.

All information in this blog post is courtesy of this document from the National Renewable Energy Laboratory.