Solar energy is the fastest-growing form of renewable energy across New York State and community solar, in turn, is a rapidly-growing aspect of the NYS solar industry, with energy consumers across the state becoming increasingly aware of the many benefits offered by this shared solar model.

According to New York Department of Public Service SIR Inventory Data from December 2020, annual installed solar capacity in the state increased 1,716% from 2010 to 2020. Although the majority of this installed capacity has come in the form of ‘on-site’ residential or commercial PV installations, there has always been demand for solar energy from those individuals, organizations, and communities who haven’t been able to install solar on-site due to barriers such as:

Thankfully, the implementation of the regulatory framework for New York community solar in 2015 created a path to solar access for those who had been unable to go solar because of the barriers to entry noted above. With the option to go solar now available to a wider range of consumers across the state, more New Yorkers are turning to community solar to reap the benefits of going solar without having to install panels at their property. In theory, any individual, organization, or other entity with an electric bill—and constraints which prevent them from installing solar panels—can sign up for a community solar project and save on their utility bills.

What is Community Solar in New York?

What are the Benefits of Community Solar in New York?

The benefits of community solar are wide-ranging for both individuals and organizations across the entire shared solar model. A new report from the New York Solar Energy Industries Association (NYSEIA), ‘Realizing the Potential for Community Solar in New York State: Benefits, Barriers, and Solutions’, identifies five key areas where the benefits of community solar are apparent. These areas are:

Below, we will examine some of the key benefits arising in each of these areas.

As noted above, many individuals, organizations, and communities are unable to install solar panels at their own properties due to a number of barriers. Indeed, a 2015 report from the National Renewable Energy Laboratory (NREL) and the U.S. Department of Energy estimated that approximately 50% of U.S. households and businesses were unable to install solar panels at their property (download the report here). The barriers to going solar can be divided into three broad categories:

Regardless of which of the above factors is preventing an individual, organization, or community from installing solar, the community solar model offers a new path to clean energy for those who were previously prohibited from accessing solar.

Community solar offers a multitude of economic benefits to subscribers and local communities. The benefits of community solar for New Yorkers generally stem from the following areas:

The environmental impact of community solar reaches beyond the benefits outlined above and into the realm of environmental justice. A lack of access to renewable energy necessitates the use of fossil fuels which can have damaging long-term implications for those communities residing in close proximity to fossil-fuel generating power plants. More often than not, these fossil fuel plants are located near communities of color, disproportionately impacting these communities through air pollution and greenhouse gas emissions which contribute to higher rates of poverty, respiratory illness, cancer, and heart disease. Deployment of community solar can address these historical inequalities by offering these communities access to clean, renewable energy and, as a result, lowering demand for energy generated by harmful fossil fuel plants.

Additionally, 35% of the benefits arising from reaching these targets will be directed to helping those communities historically impacted by climate change and fossil fuel plants.

To achieve the distributed solar target of 6,000 MW by 2025, an average deployment of 640 MW-DC every year from 2021 to 2025 will be required — roughly twice the average annual installation volume from 2016 through 2020. With these ambitious targets in place, community solar will play a key role in achieving the necessary deployment of distributed solar in the coming years and, most importantly, will provide equitable access to those communities previously prohibited from going solar.

How Does Community Solar Work in New York?

The basic framework of the New York community solar model can be broken down into a number of steps involving parties such as sponsors, subscribers, installers, and utilities.

The graphic below, courtesy of NYSEIA, shows the basic design of New York’s Community Distributed Generation Program and the relationships between the various entities which allow for the community solar model to function. 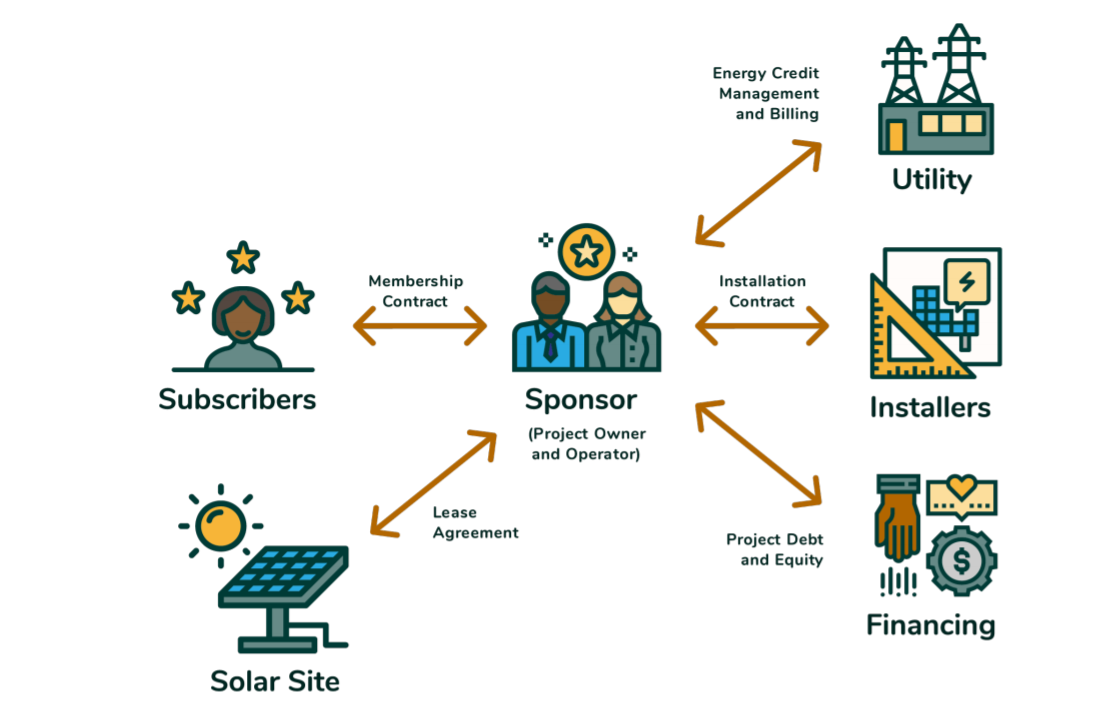 If you’re interested in New York community solar then reach out to YSG Solar today. YSG will identify the ideal community solar project for your needs and guide you through the entire subscription process to ensure the biggest savings on your utility bill. To learn more, get in touch by sending an email or calling at 212.389.9215.

All content in this article is taken from the New York Solar Energy Industries Association (NYSEIA) report, ‘Realizing the Potential for Community Solar in New York State: Benefits, Barriers, and Solutions’. Read the full report here.