A microgrid is a controllable local energy grid which can be disconnected from the traditional energy grid, allowing it to operate autonomously. Differing from the conventional idea of backup power, microgrids turn energy consumers into energy producers, placing this consumer-producer hybrid at the center of an interconnected, highly-efficient energy system. Below, we will further explore the idea of microgrids and, in particular, focus on the potential benefits they offer to New Yorkers.

What is a Microgrid?

As defined by the U.S. Department of Energy, the term ‘microgrid’ refers to a group of interconnected loads and distributed energy resources, within clearly defined electrical boundaries, that acts as a single controllable entity in relation to the grid—capable of connecting to, and disconnecting from, the grid in order to operate in both a grid-connected mode and an island mode. The below graphic, courtesy of the New York State Energy Research and Development Authority (NYSERDA), shows examples of the many different distributed generation sites which can make up a microgrid. 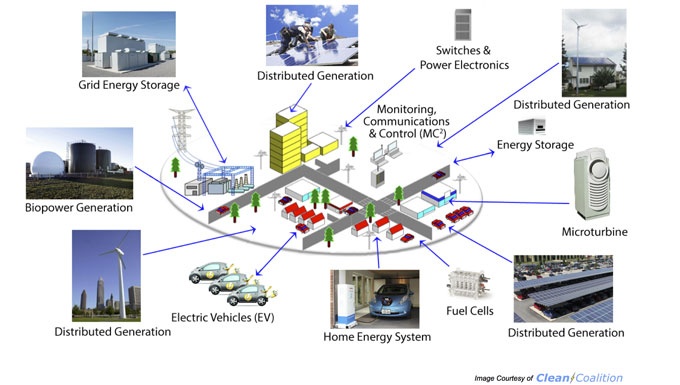 How do Microgrids Work?

A microgrid, as the name suggests, acts in a similar fashion to the traditional power grid. The traditional power grid connects residential, commercial, and other properties to centralized power sources, giving us access to the energy necessary to power our homes and businesses. However, the interconnected nature of how the power grid operates means that any issue which impacts the grid, impacts all of us. If there is a power outage, or repairs are being carried out, this affects everyone connected to the grid.

This is where microgrids come in. Although microgrids typically operate while connected to the grid, they are capable of breaking away from the grid and operating on their own. Therefore, in the event of a power outage, a weather event, or any other crisis, a microgrid can separate from the grid and continue to operate using its own local energy generation. As we’ve seen in the NYSERDA graphic above, a microgrid may be powered by a wide range of sources, including distributed generators, batteries, and renewables like solar or wind.

How Much Power Does a Microgrid Offer?

Microgrids aren’t a one-size-fits-all solution, they can be modified for a wide range of purposes, varying in both size and design. Many microgrids provide power for individual facilities, such as Santa Rita Jail in Dublin, California, whereas other microgrids provide power for larger areas. In Fort Collins, Colorado, for example, a microgrid has been implemented as one part of a broader goal to create a district where energy production is equal to energy consumption. Further information about microgrid development and deployment is available from the U.S. Department of Energy at this link.

In addition to benefiting both residential and commercial energy consumers, the deployment of microgrids across the state of New York could serve hospitals, police stations, fire stations, emergency shelters, water filtration plants, sewage treatment plants, and a whole host of other facilities which are essential for the functioning of our state. Additionally, effective distribution of microgrids would serve those areas which have suffered storm damage in the past and could be likely to suffer from adverse weather events in the future.

Typically, microgrids have served single users, such as universities or hospitals, but a community-based approach, focusing on the implementation of renewable energy projects alongside microgrids, could provide multiple users with safe, reliable energy sources. Community microgrids often build on existing neighborhood infrastructure and equipment, connecting multiple users in the area and, in the event of a power outage, offer energy independence and autonomy, alongside local generation and distribution. Additionally, microgrids may be able to connect to local energy resources which are too small or unreliable for use with the traditional power grid.

The implementation of microgrids throughout the state of New York would allow for further deployment of clean, efficient distributed energy resources (DERs) such as energy storage, solar PV, and wind energy. The development of new microgrids and DERs, working in tandem, would serve to improve both the economic and environmental health of countless communities across NY.

Interested in developing your own New York renewable energy project? Reach out to YSG Solar today. YSG has been working in the solar industry for over ten years and will identify the ideal solar project for your needs—whether it’s a rooftop installation, a community solar subscription, or a solar land lease. Call the office at 212.389.9215 or send us an email to learn more.