NYSERDA’s Retail and Bulk Energy Storage Programs have reached another significant milestone. The cumulative power capacity of energy storage installations receiving an incentive award through NYSERDA’s Retail and Bulk Energy Storage Programs now stands at 904 MW as of 12/31/2021. The chart below, from NYSERDA, illustrates the progress made in the awards of these energy storage incentives from 2017 through to the end of 2021. As you can see, the massive growth from 6 MW in 2017 to 904 MW is quite an achievement, and an extremely positive sign for the future development of energy storage in New York State. 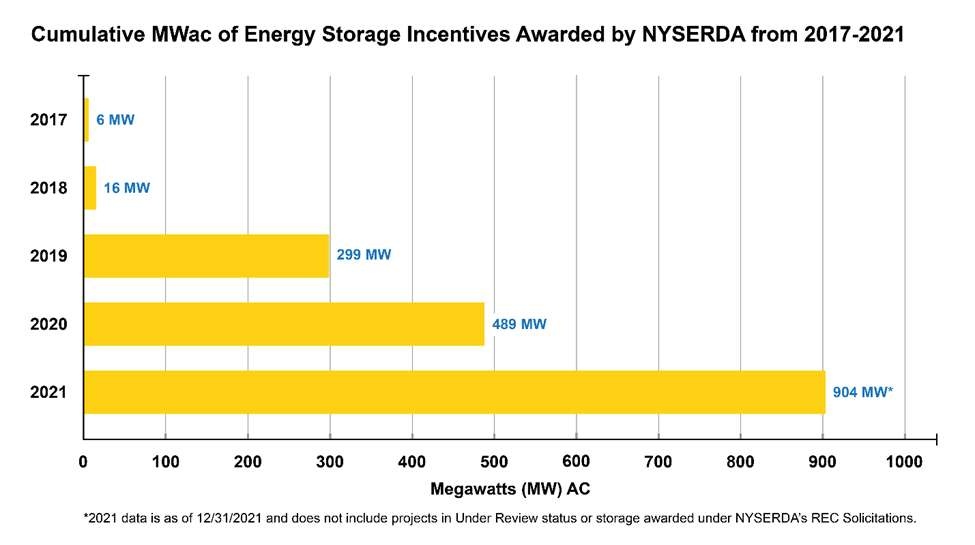 It’s also important to note that the 904 MW figure for 2021 does not include energy storage capacity which has been acquired through utility RFPs, NYSERDA’s Large-Scale Renewable Program, or Utility Non-Wires Alternatives. If you were to add this additional capacity into the mix, the figure for total capacity under contract would come to more than 1,200 MW. If you would like to view additional data about New York energy storage deployment and incentivization, you do so on the NYSERDA website at this link.

Energy storage is a key component of NY’s ambitious clean energy goals. The Climate Leadership and Community Protection Act (CLCPA), one of the most aggressive clean energy mandates in the United States, targets 70 percent of NY electricity from renewable sources by 2030—and 3,000 MW of energy storage by 2030. This energy storage target has since been updated to 6 GW by 2030, following Governor Kathy Hochul’s announcement at the 2022 State of the State Address. This new target cements NY’s status as a nationwide leader in the energy storage sector. Following the announcement, NYSERDA and DPS will update the existing Energy Storage Roadmap to reflect the additional deployment needed to hit 6 GW by 2030. The updated Roadmap will include market reforms, cost-effective procurement mechanisms, and R&D for the acceleration of energy storage innovation in New York.

Governor Hochul also announced the opening of a new battery research and manufacturing center at Binghamton University. Battery NY will be led by Nobel Prize winner Professor Stanley Whittingham. Professor Whittingham is one of the inventors of the lithium-ion battery. Along with the announcement of the expanded energy storage goal, the opening of Battery NY further solidifies NY’s commitment to energy storage as a key tool in the decarbonization process.

If you are interested in a battery storage system for your home or business, reach out to YSG Solar today. Whether or not you have installed solar panels with YSG previously, we will help to identify the potential of a battery storage system and determine how it could benefit you financially. Call the office at 212.389.9215 or send us an email to learn more about New York energy storage.