Released at the tail end of last year, Environment America Research & Policy Center’s annual Renewables on the Rise report has detailed the significant progress of renewable energy sources such as solar over the past decade. The report finds that clean energy is growing rapidly across the United States, with even more dramatic growth likely in the coming years. The full report is available to download here from the YSG website, or here from the Environment America Research & Policy Center.

Renewables on the Rise 2021

Across the past decade, renewable energy sources such as solar and wind have gone from a tiny part of the energy landscape to a significant contributor. As the urgency of the climate crisis becomes more apparent, the desire to develop new clean energy solutions has grown stronger, leading to new developments in the renewable energy sector on a near-daily basis.

In 2020, the United States produced nearly 4 times more renewable energy from solar and wind than in 2011—taking solar and wind from 3% of U.S. electricity in 2011 to 11% in 2020. This exponential growth shows that an economy powered entirely by renewables is no longer a far-off dream, but a real possibility.

The annual growth rate of wind, solar, and geothermal generation between 2011 and 2020 was 15%. If this trend continues, then wind, solar, and geothermal would provide enough electricity to meet the country’s current electricity needs by 2035. The growth of renewable energy over the last decade has shown that the United States is shifting away from its dependency on fossil fuels and, with serious commitment from businesses, cities, states, and the country overall, the goal of sourcing 100% of the nation’s energy from renewable sources can be achieved.

The Growth of Clean Energy Technologies

The graphic below, courtesy of the Environment America Research & Policy Center, shows the growth of clean energy technologies in the United States between 2011 and 2020. 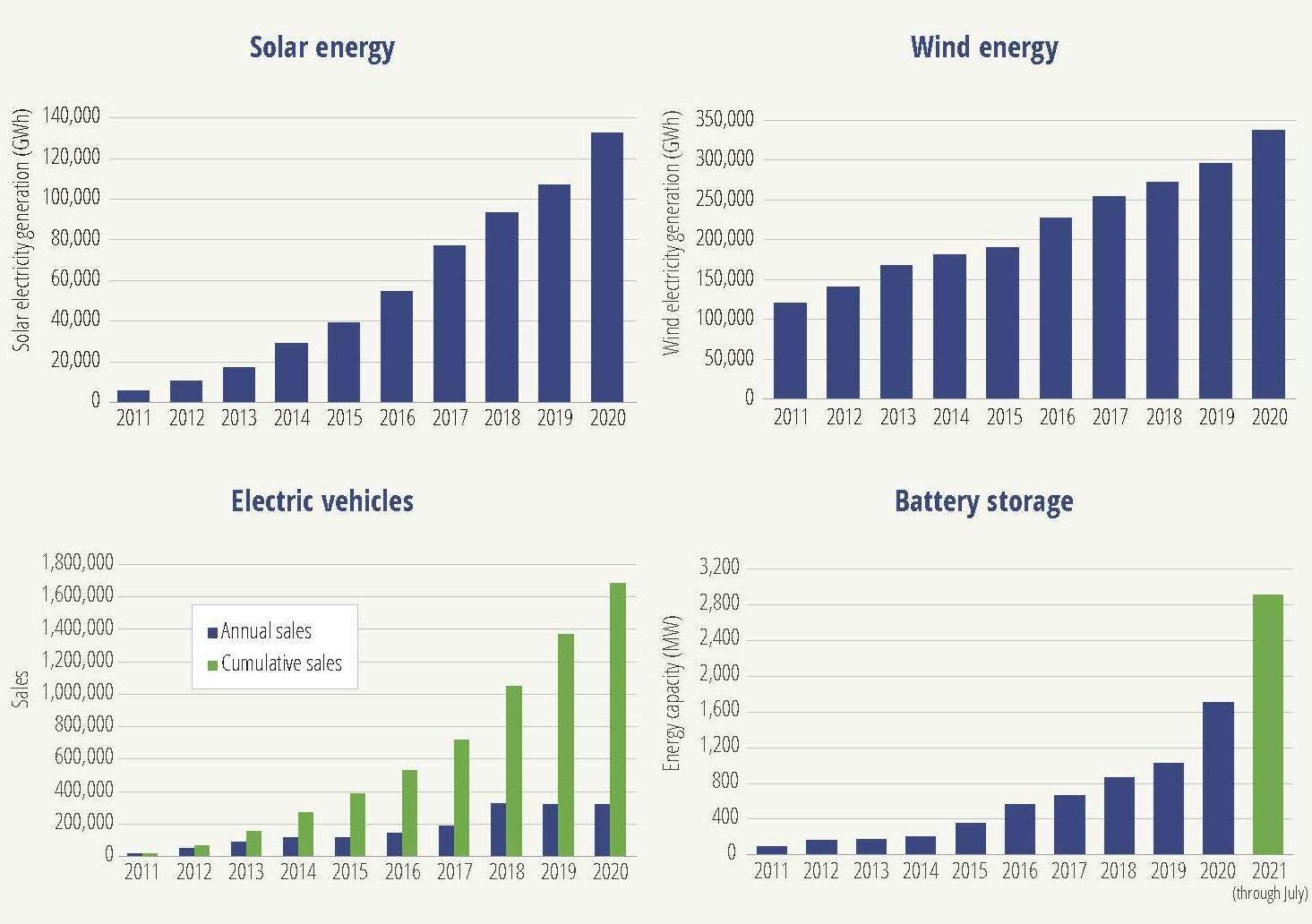 As you can see from the charts above, solar energy, wind energy, electric vehicles, and battery storage—the key technologies needed to power the U.S. with clean energy—have all grown significantly across the past decade. Below, we will take a closer look at the numbers behind the visuals for each of these technologies, using figures from the Renewables on the Rise 2021 report.

How Cities, States, and the Federal Government Should Accelerate the Transition to Clean Energy

Strong and supportive public policies have played a vital role in the growth of clean energy technologies so far, and the Environment America Research & Policy Center has included in their report a number of suggestions for cities, states and the federal government to continue and accelerate this growth. Below, we have briefly detailed a number of key suggestions.

To learn more about how you can play your part in America’s clean energy future—and save money while doing so—contact YSG Solar today. YSG has worked in the solar industry for over a decade, contributing to the renewable energy growth outlined in this article. We will identify the ideal solar solution for your energy needs and make that solution a reality. Call the office at 212.389.9215 or send us an email to learn how much you could save with solar.