The Benefits of Solar for Schools & Universities

Most school/university buildings have flat roofs, which makes for a simple solar installation process, and the potential for lower operating costs is a big draw as well. Additionally, schools and universities are likely to teach students about renewables and environmentalism, paving the way for a clean energy future. With this in mind, a solar panel installation on the building itself is a powerful way to commit to a better tomorrow for students. On a practical level, an institution like a school or university will likely have a large electric bill and solar can help to massively offset these utility costs. Below, we will explore the key benefits of solar for schools and universities. 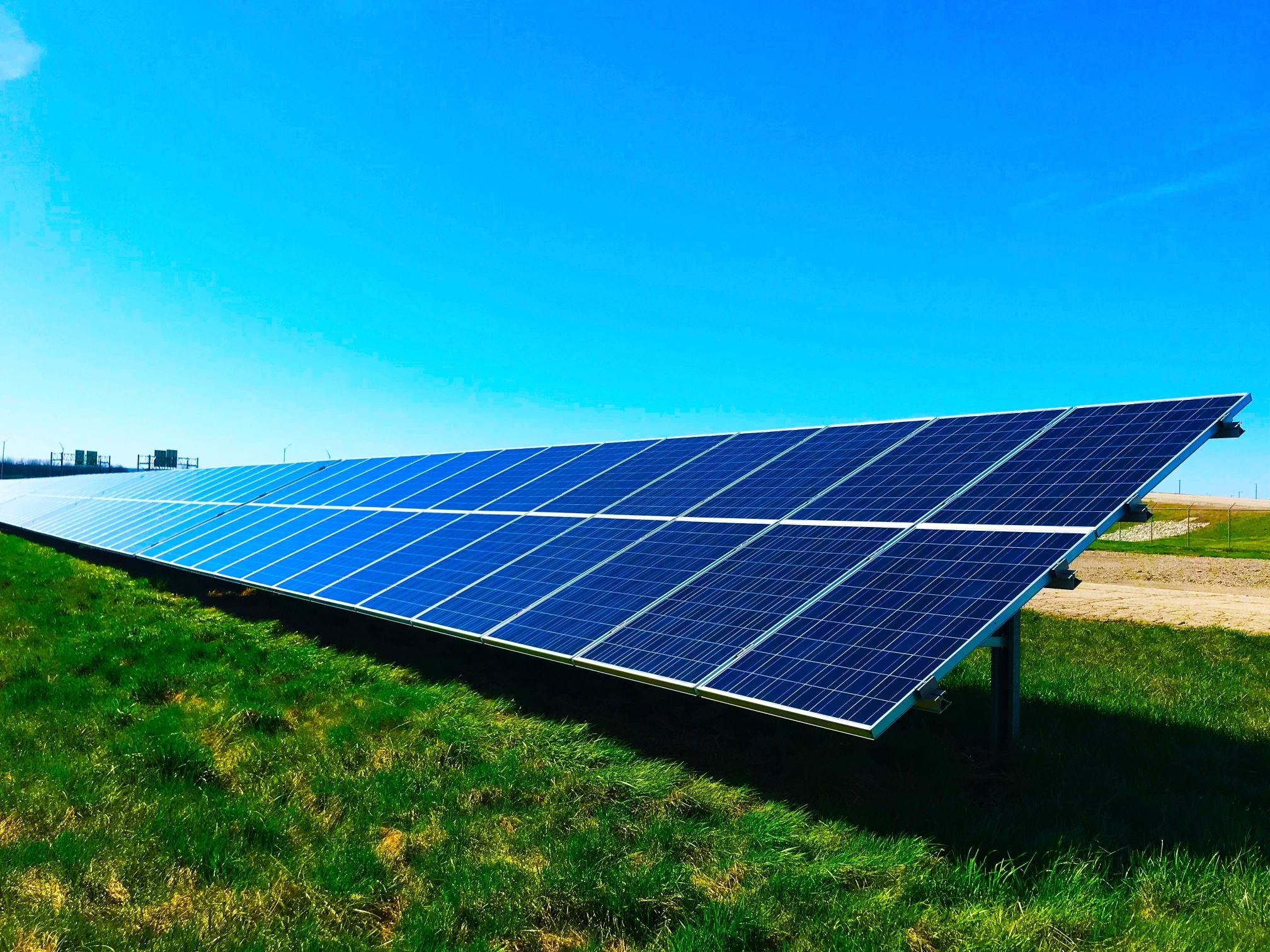 As with a residential or commercial solar system, the biggest draw of going solar for a school or university is the potential for utility bill savings. With a large educational institution, it’s likely that utility costs will make up a significant chunk of the overall operating costs. Solar offers a safe return on investment, with the system generating free energy once it has been paid off—offsetting the initial cost of going solar as well as reducing utility costs. Generally speaking, the larger the solar system, the lower the cost per watt, so schools and universities are uniquely positioned to save with solar thanks to their abundant roof space. What’s more, a solar installation safeguards against volatile utility rates, which have been rising in recent years. This trend looks set to continue into the future, so a solar array can offer protection from the volatility of the market moving forward.

Not only do schools and universities tend to have a larger amount of roof space to accommodate the solar panels, they also tend to have flat roofs, making for an easy installation process. This abundance of unshaded roof space offers the greatest potential for solar energy generation and, thus, the greatest potential for savings. Residential properties often face difficulties because they have older roofs, or roofs made of unsuitable materials to house the solar array. Thankfully, this is rarely the cause for a school/university rooftop, adding to the ease of installation for solar companies.

A solar panel installation, while generally operating in conjunction with the overall power grid, can still offer a level of autonomy and independence in the event of a power outage. If a power outage does occur, the solar system has the potential to offer backup power in the case of an emergency. This could be hugely beneficial as an alternative means of energy while the grid power is being restored. The installation of an energy storage system alongside the solar panel array could take this energy independence to a whole new level.

A visible commitment to clean, renewable energy can generate a lot of goodwill in the local community, or even among national press. A university/school powered by solar energy can be a big draw in our increasingly eco-conscious society. Investors may be more inclined to put their faith in a forward-thinking university, and enrollment may even see a boost. This is particularly true for younger generations, who have shown a clear preference for green energy—an operating solar array at their prospective university could sway their decision. In 2021, installing solar panels can only lead to an improved public image for both schools and universities.

Solar panels are extremely durable and long-lasting, they’re built for all kinds of weather conditions, and designed to last somewhere in the region of 25 - 30 years—though they have been known to last even longer in certain conditions. Minimal maintenance is required once the installation has been completed. It’s a good idea to perform inspections of the panels on a semi-regular basis, particularly for a school or university, but beyond that they require very little attention.

A visible solar array on a school or university makes a clear statement of intent and could spark further solar installations throughout the local community. When word of the benefits of solar begins to spread, it can lead to increased uptake in the area. Schools and universities can lead the way in this regard, contributing to the wider growth of renewable energy by taking a visible step in their own communities. The opportunity to see an operational, successful solar panel array will do a huge amount to convince locals of the positive impact of solar energy—and show them the savings on offer.

A solar panel installation is a tangible way to lower your carbon footprint and reduce greenhouse gas emissions. With clean energy targets being implemented across the United States, every contribution to meeting our collective environmental targets will be more than welcome. As noted earlier, young people have clearly expressed their positive feelings about renewable energy, and their concern for the future of our planet. For schools, going solar is a fantastic way to embrace the enthusiasm of young students and take a big positive step for their future.

As with other residential and commercial solar panel installations, the big question when it comes to financing a school solar system is whether to purchase the system outright or to lease the panels. In most other cases, the consensus seems to be that purchasing the system offers the greatest return on investment in the long run. However, because most schools are categorized as nonprofits, this doesn’t necessarily hold true for a school going solar.

If categorized as a nonprofit, this would prevent the school from taking advantage of all the excellent tax breaks available for solar, meaning that purchasing the system isn’t necessarily the right call. With this being the case, most schools will opt for a solar lease or power purchase agreement (PPA) as a means of going solar. This isn’t to say that purchasing the solar system is out of the question entirely. Depending on the specific case, and the developer you work with, a purchase may turn out to be the more economically viable option. The best way to determine whether a purchase or a lease is the correct option is to speak directly to a developer like YSG Solar about the requirements of your school/university.

The Success of Solar in Schools

Released in November 2017, Brighter Future: A Study on Solar in U.S. Schools, 2nd Edition, is a comprehensive report on solar at K-12 schools across the United States. The report was compiled by The Solar Foundation, Generation 180, and the Solar Energy Industries Association, and offers an excellent insight into the growth of solar for U.S. schools. You can read the full report by clicking here, but we’ve also noted some of the key statistics from the report below. Again, please note that these figures are correct as of the report’s publication in November 2017 and will have changed by now:

If you head over to The Solar Foundation website (click here), you’ll find an interactive map which really gives a sense of the popularity of solar for K-12 schools. The image below, also courtesy of The Solar Foundation, gives an overview of this growth, while also highlighting some of the key reasons for schools to go solar. 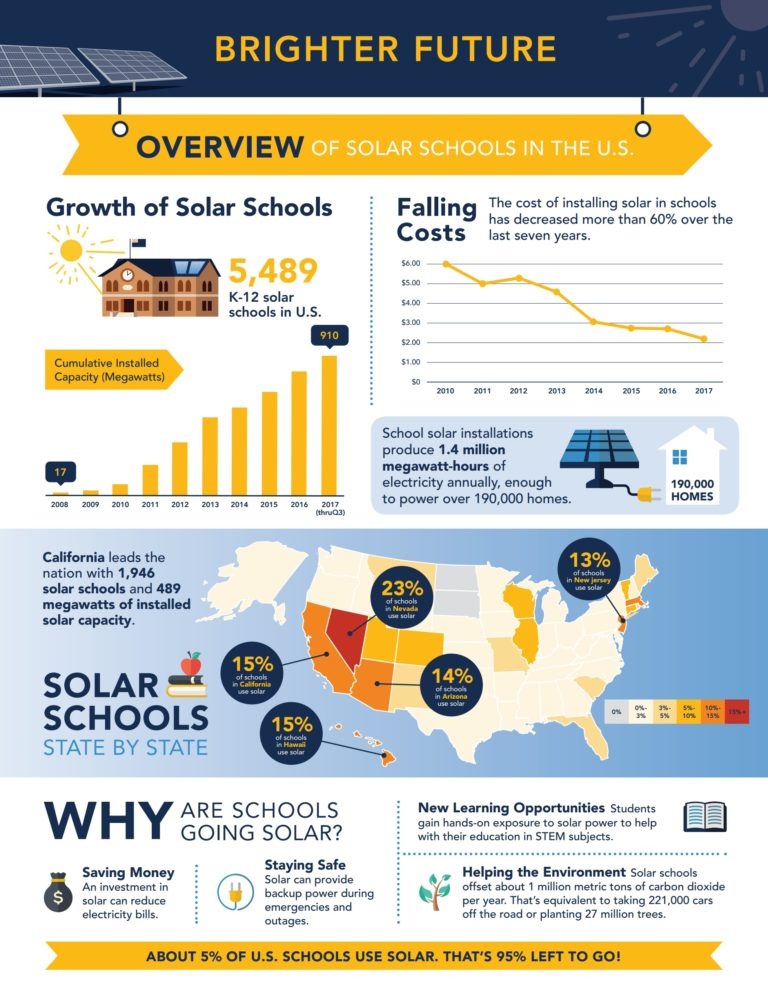 Stanford, in particular, has set ambitious goals relating to solar energy and sustainability. In fact, Stanford has set a target of using 100% solar energy by 2021.

School and university representatives interested in going solar should seek out the advice of an experienced developer like YSG Solar. Send us an email, or call at 212.389.9215 and we will be happy to discuss all your options. We will identify the ideal solar project for your energy needs, ensuring maximum solar savings in the long run.